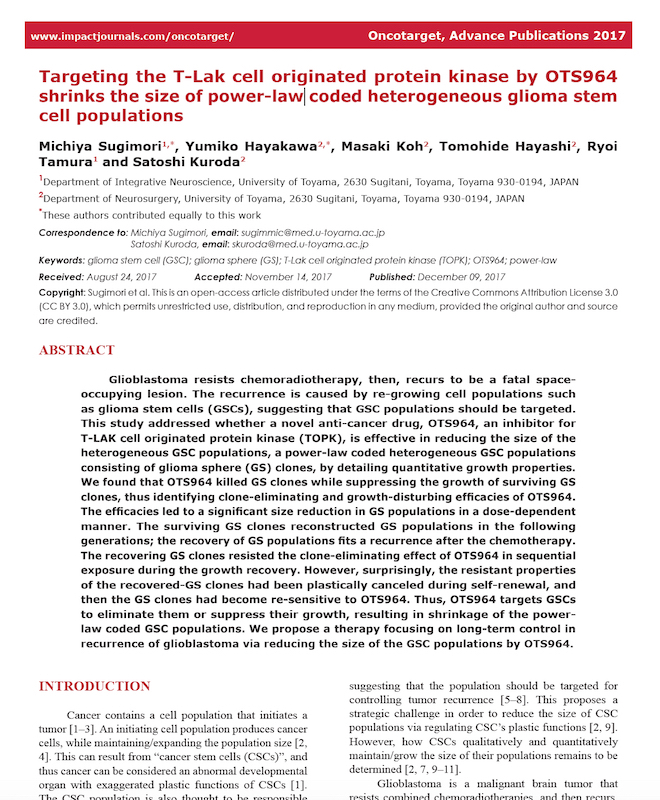 A Voyage to Depth of Neuroscience Vol. 41

ABSTRACT
Glioblastoma resists chemoradiotherapy, then, recurs to be a fatal space occupying lesion. The recurrence is caused by re-growing cell populations such as glioma stem cells (GSCs), suggesting that GSC populations should be targeted.
This study addressed whether a novel anti-cancer drug, OTS964, an inhibitor for T-LAK cell originated protein kinase (TOPK), is effective in reducing the size of the heterogeneous GSC populations, a power-law coded heterogeneous GSC populations consisting of glioma sphere (GS) clones, by detailing quantitative growth properties.
We found that OTS964 killed GS clones while suppressing the growth of surviving GS clones, thus identifying clone-eliminating and growth-disturbing efficacies of OTS964.
The efficacies led to a significant size reduction in GS populations in a dose-dependent manner. The surviving GS clones reconstructed GS populations in the following
generations; the recovery of GS populations fits a recurrence after the chemotherapy. The recovering GS clones resisted the clone-eliminating effect of OTS964 in sequential
exposure during the growth recovery. However, surprisingly, the resistant properties of the recovered-GS clones had been plastically canceled during self-renewal, and then the GS clones had become re-sensitive to OTS964. Thus, OTS964 targets GSCs to eliminate them or suppress their growth, resulting in shrinkage of the power law coded GSC populations. We propose a therapy focusing on long-term control in recurrence of glioblastoma via reducing the size of the GSC populations by OTS964.