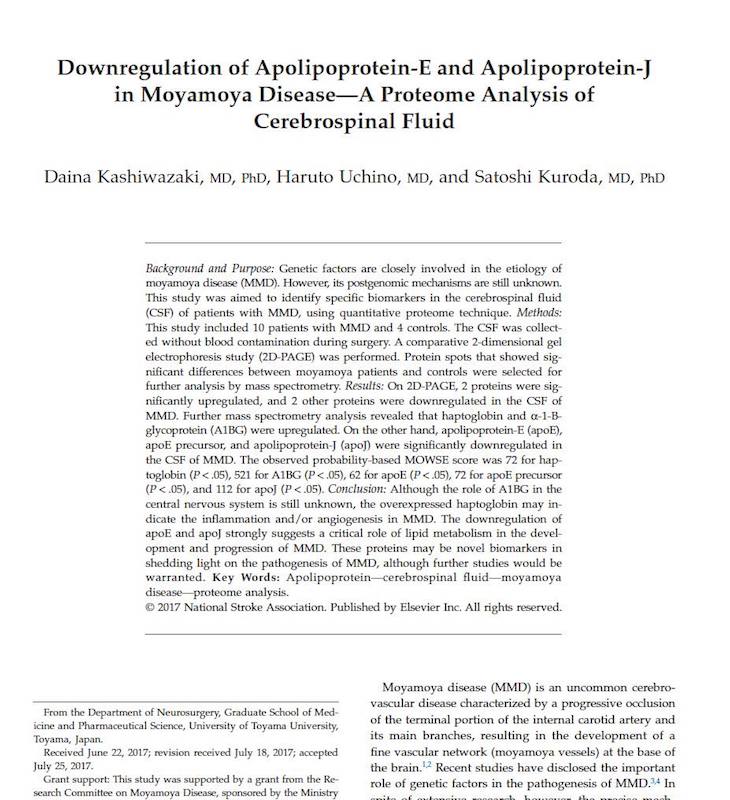 A Voyage to Depth of Neuroscience Vol. 38

BACKGROUND AND PURPOSE:
Genetic factors are closely involved in the etiology of moyamoya disease (MMD). However, its postgenomic mechanisms are still unknown. This study was aimed to identify specific biomarkers in the cerebrospinal fluid (CSF) of patients with MMD, using quantitative proteome technique.
METHODS:
This study included 10 patients with MMD and 4 controls. The CSF was collected without blood contamination during surgery. A comparative 2-dimensional gel electrophoresis study (2D-PAGE) was performed. Protein spots that showed significant differences between moyamoya patients and controls were selected for further analysis by mass spectrometry.
RESULTS:
On 2D-PAGE, 2 proteins were significantly upregulated, and 2 other proteins were downregulated in the CSF of MMD. Further mass spectrometry analysis revealed that haptoglobin and α-1-B-glycoprotein (A1BG) were upregulated. On the other hand, apolipoprotein-E (apoE), apoE precursor, and apolipoprotein-J (apoJ) were significantly downregulated in the CSF of MMD. The observed probability-based MOWSE score was 72 for haptoglobin (P <.05), 521 for A1BG (P <.05), 62 for apoE (P <.05), 72 for apoE precursor (P <.05), and 112 for apoJ (P <.05).
CONCLUSION:
Although the role of A1BG in the central nervous system is still unknown, the overexpressed haptoglobin may indicate the inflammation and/or angiogenesis in MMD. The downregulation of apoE and apoJ strongly suggests a critical role of lipid metabolism in the development and progression of MMD. These proteins may be novel biomarkers in shedding light on the pathogenesis of MMD, although further studies would be warranted.
https://www.ncbi.nlm.nih.gov/pubmed/28843803