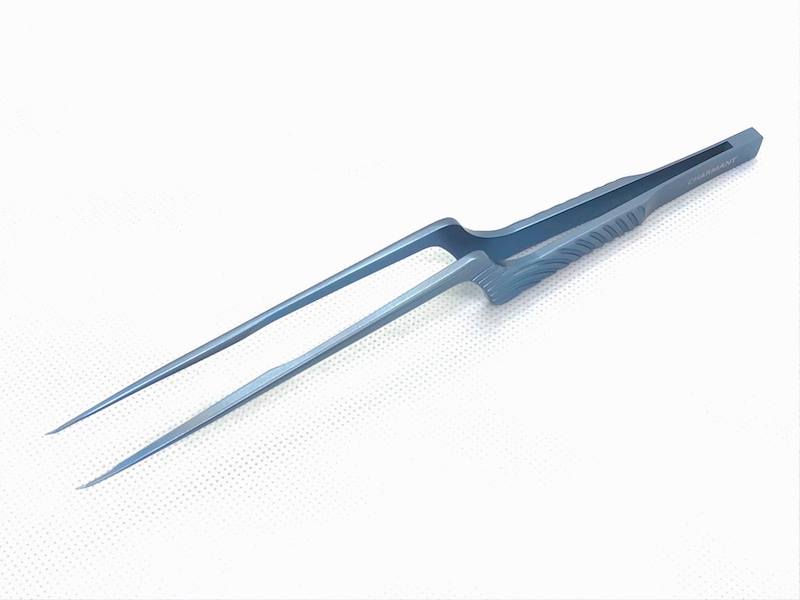 Prof. Satoshi Kuroda has developed the new titanium forceps, K2, in collaboration with Charmant Co., a Japanese company that had developed and marketed the forceps, clips, and clamps for bypass surgery as part of Kuroda’s Series.
In general, long forceps are needed for deep surgery, such as at the skull base, and the longer the forceps are, the more slender they become, causing scissoring and other problems. However, if a forceps forceps is too rigid, it may obstruct the field of vision for surgical procedures. The new K2 series forceps are designed to keep the forceps as thin as possible, prevent scissoring, and allow the force of the hand to be applied reliably to the tip.
This is the first of the new K2 series. The “K2” stands for Kamiyama x Kuroda, a collaboration with Kuroda’s master, Prof. Hiroyasu Kamiyama who is the most skillful neurosurgeon in the world. It also has double meaning, including the intention to “aim for the world’s highest peak,” in honor of K2, the world’s second highest peak at 8,611 meters.
Since we have already obtained a regulatory approval in Japan, we will start the trial run next week and prepare to sell the product as soon as possible.