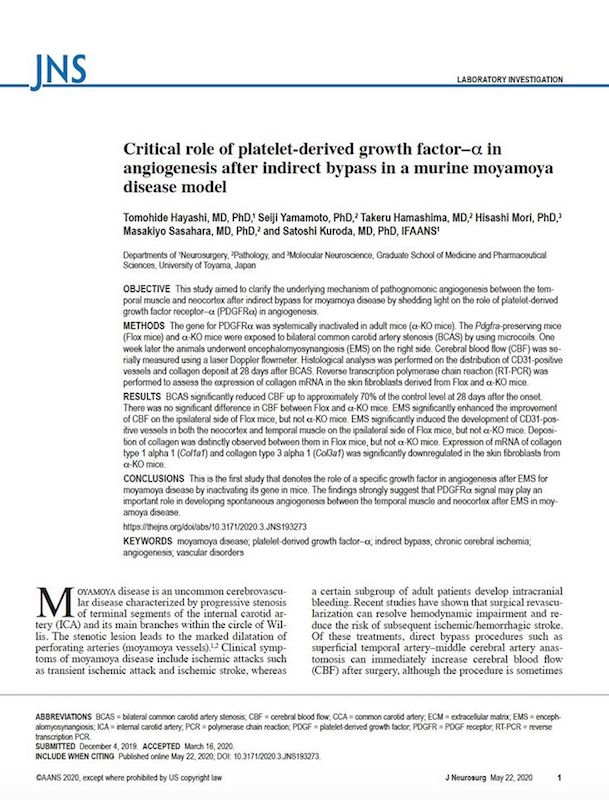 A Voyage to Depth of Neuroscience Vol. 71

One of our staffs, Dr. Tomohide Hayashi has published his basic research on moyamoya disease in Journal of Neurosurgery, an official journal of American Association of Neurological Surgeons (AANS).

Abstract
Objective: This study aimed to clarify the underlying mechanism of pathognomonic angiogenesis between the temporal muscle and neocortex after indirect bypass for moyamoya disease by shedding light on the role of platelet-derived growth factor receptor-α (PDGFRα) in angiogenesis.

Methods: The gene for PDGFRα was systemically inactivated in adult mice (α-KO mice). The Pdgfra-preserving mice (Flox mice) and α-KO mice were exposed to bilateral common carotid artery stenosis (BCAS) by using microcoils. One week later the animals underwent encephalomyosynangiosis (EMS) on the right side. Cerebral blood flow (CBF) was serially measured using a laser Doppler flowmeter. Histological analysis was performed on the distribution of CD31-positive vessels and collagen deposit at 28 days after BCAS. Reverse transcription polymerase chain reaction (RT-PCR) was performed to assess the expression of collagen mRNA in the skin fibroblasts derived from Flox and α-KO mice.

Conclusions: This is the first study that denotes the role of a specific growth factor in angiogenesis after EMS for moyamoya disease by inactivating its gene in mice. The findings strongly suggest that PDGFRα signal may play an important role in developing spontaneous angiogenesis between the temporal muscle and neocortex after EMS in moyamoya disease.