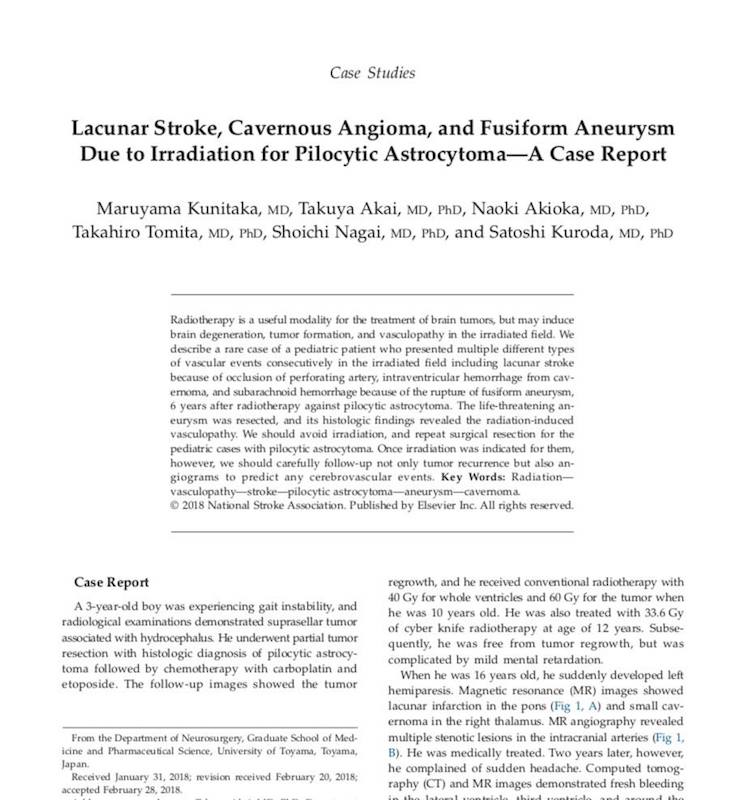 The Long & Winding Road To Be A Neurosurgeon Vol. 43

Our resident has published his second English-written article in Journal of Stroke and Cerebrovascular Diseases this April. I strongly hope that he will continue his efforts to be both a neurosurgeon and neuroscientist.

Abstract
Radiotherapy is a useful modality for the treatment of brain tumors, but may induce brain degeneration, tumor formation, and vasculopathy in the irradiated field. We describe a rare case of a pediatric patient who presented multiple different types of vascular events consecutively in the irradiated field including lacunar stroke because of occlusion of perforating artery, intraventricular hemorrhage from cavernoma, and subarachnoid hemorrhage because of the rupture of fusiform aneurysm, 6 years after radiotherapy against pilocytic astrocytoma. The life-threatening aneurysm was resected, and its histologic findings revealed the radiation-induced vasculopathy. We should avoid irradiation, and repeat surgical resection for the pediatric cases with pilocytic astrocytoma. Once irradiation was indicated for them, however, we should carefully follow-up not only tumor recurrence but also angiograms to predict any cerebrovascular events.