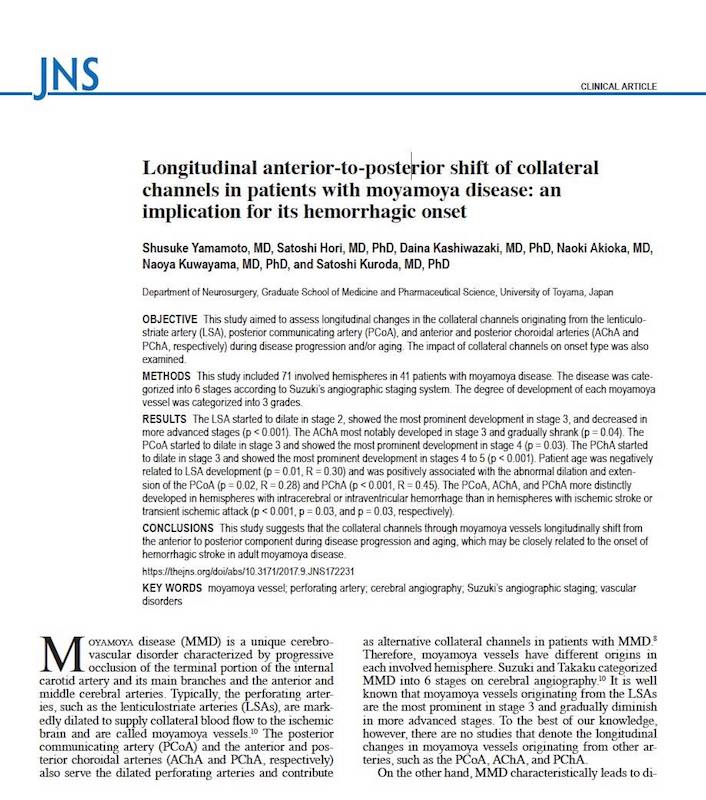 A Voyage to Depth of Neuroscience Vol. 44

Abstract
OBJECTIVE This study aimed to assess longitudinal changes in the collateral channels originating from the lenticulostriate artery (LSA), posterior communicating artery (PCoA), and anterior and posterior choroidal arteries (AChA and PChA, respectively) during disease progression and/or aging. The impact of collateral channels on onset type was also examined. METHODS This study included 71 involved hemispheres in 41 patients with moyamoya disease. The disease was categorized into 6 stages according to Suzuki’s angiographic staging system. The degree of development of each moyamoya vessel was categorized into 3 grades. RESULTS The LSA started to dilate in stage 2, showed the most prominent development in stage 3, and decreased in more advanced stages (p < 0.001). The AChA most notably developed in stage 3 and gradually shrank (p = 0.04). The PCoA started to dilate in stage 3 and showed the most prominent development in stage 4 (p = 0.03). The PChA started to dilate in stage 3 and showed the most prominent development in stages 4 to 5 (p < 0.001). Patient age was negatively related to LSA development (p = 0.01, R = 0.30) and was positively associated with the abnormal dilation and extension of the PCoA (p = 0.02, R = 0.28) and PChA (p < 0.001, R = 0.45). The PCoA, AChA, and PChA more distinctly developed in hemispheres with intracerebral or intraventricular hemorrhage than in hemispheres with ischemic stroke or transient ischemic attack (p < 0.001, p = 0.03, and p = 0.03, respectively). CONCLUSIONS This study suggests that the collateral channels through moyamoya vessels longitudinally shift from the anterior to posterior component during disease progression and aging, which may be closely related to the onset of hemorrhagic stroke in adult moyamoya disease.