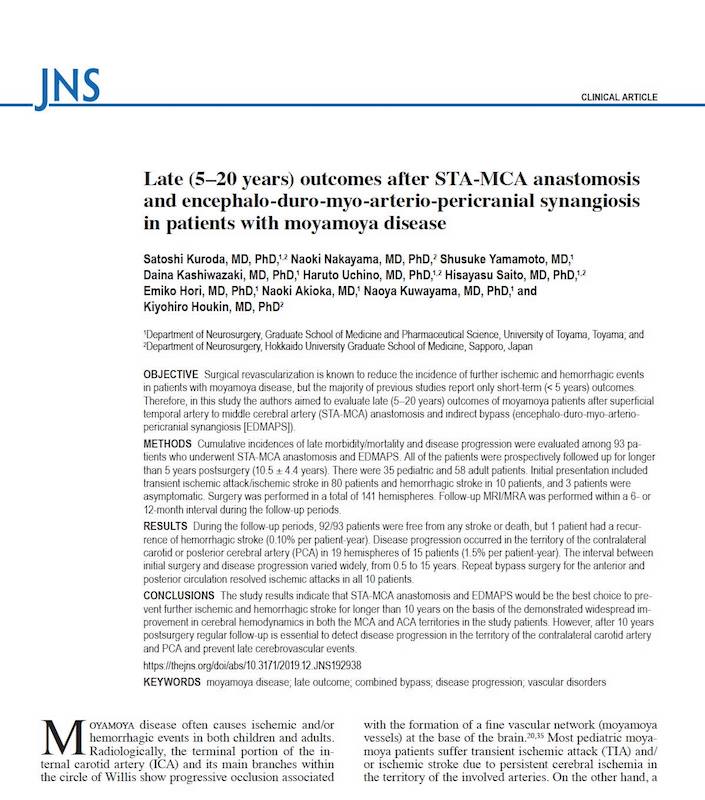 A Voyage to Depth of Neuroscience Vol. 70

Abstract
OBJECTIVE:
Surgical revascularization is known to reduce the incidence of further ischemic and hemorrhagic events in patients with moyamoya disease, but the majority of previous studies report only short-term (< 5 years) outcomes. Therefore, in this study the authors aimed to evaluate late (5-20 years) outcomes of moyamoya patients after superficial temporal artery to middle cerebral artery (STA-MCA) anastomosis and indirect bypass (encephalo-duro-myo-arterio-pericranial synangiosis [EDMAPS]).
METHODS:
Cumulative incidences of late morbidity/mortality and disease progression were evaluated among 93 patients who underwent STA-MCA anastomosis and EDMAPS. All of the patients were prospectively followed up for longer than 5 years postsurgery (10.5 ± 4.4 years). There were 35 pediatric and 58 adult patients. Initial presentation included transient ischemic attack/ischemic stroke in 80 patients and hemorrhagic stroke in 10 patients, and 3 patients were asymptomatic. Surgery was performed in a total of 141 hemispheres. Follow-up MRI/MRA was performed within a 6- or 12-month interval during the follow-up periods.
RESULTS:
During the follow-up periods, 92/93 patients were free from any stroke or death, but 1 patient had a recurrence of hemorrhagic stroke (0.10% per patient-year). Disease progression occurred in the territory of the contralateral carotid or posterior cerebral artery (PCA) in 19 hemispheres of 15 patients (1.5% per patient-year). The interval between initial surgery and disease progression varied widely, from 0.5 to 15 years. Repeat bypass surgery for the anterior and posterior circulation resolved ischemic attacks in all 10 patients.
CONCLUSIONS:
The study results indicate that STA-MCA anastomosis and EDMAPS would be the best choice to prevent further ischemic and hemorrhagic stroke for longer than 10 years on the basis of the demonstrated widespread improvement in cerebral hemodynamics in both the MCA and ACA territories in the study patients. However, after 10 years postsurgery regular follow-up is essential to detect disease progression in the territory of the contralateral carotid artery and PCA and prevent late cerebrovascular events.