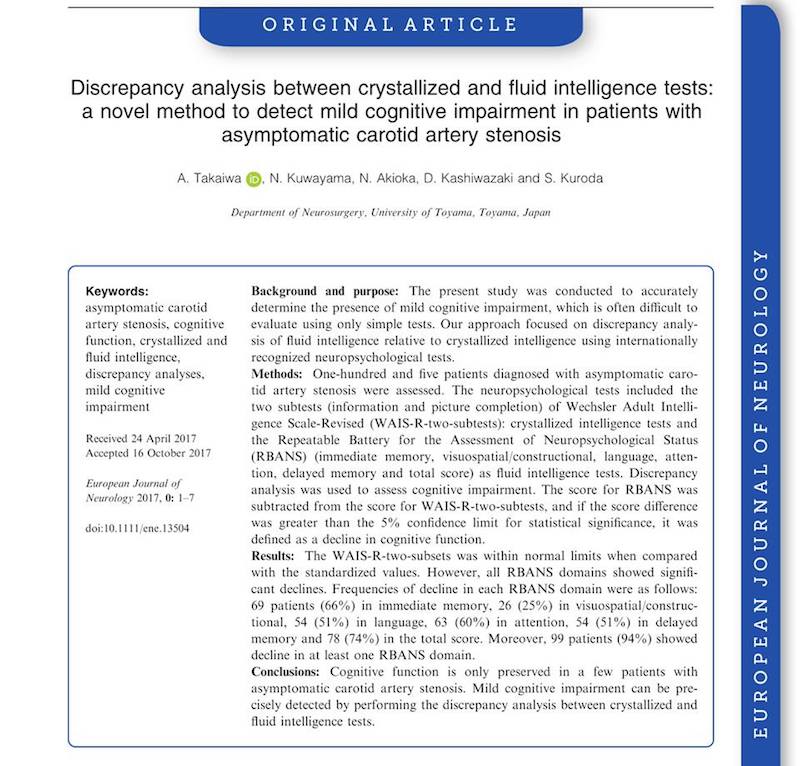 A Voyage to Depth of Neuroscience Vol. 40

Abstract
BACKGROUND AND PURPOSE:
The present study was conducted to accurately determine the presence of mild cognitive impairment, which is often difficult to evaluate using only simple tests. Our approach focused on discrepancy analysis of fluid intelligence relative to crystallized intelligence using internationally recognized neuropsychological tests.
METHODS:
One-hundred and five patients diagnosed with asymptomatic carotid artery stenosis were assessed. The neuropsychological tests included the two subtests (information and picture completion) of Wechsler Adult Intelligence Scale-Revised (WAIS-R-two-subtests): crystallized intelligence tests and the Repeatable Battery for the Assessment of Neuropsychological Status (RBANS) (immediate memory, visuospatial/constructional, language, attention, delayed memory and total score) as fluid intelligence tests. Discrepancy analysis was used to assess cognitive impairment. The score for RBANS was subtracted from the score for WAIS-R-two-subtests, and if the score difference was greater than the 5% confidence limit for statistical significance, it was defined as a decline in cognitive function.
RESULTS:
The WAIS-R-two-subsets was within normal limits when compared with the standardized values. However, all RBANS domains showed significant declines. Frequencies of decline in each RBANS domain were as follows: 69 patients (66%) in immediate memory, 26 (25%) in visuospatial/constructional, 54 (51%) in language, 63 (60%) in attention, 54 (51%) in delayed memory and 78 (74%) in the total score. Moreover, 99 patients (94%) showed decline in at least one RBANS domain.
CONCLUSIONS:
Cognitive function is only preserved in a few patients with asymptomatic carotid artery stenosis. Mild cognitive impairment can be precisely detected by performing the discrepancy analysis between crystallized and fluid intelligence tests.