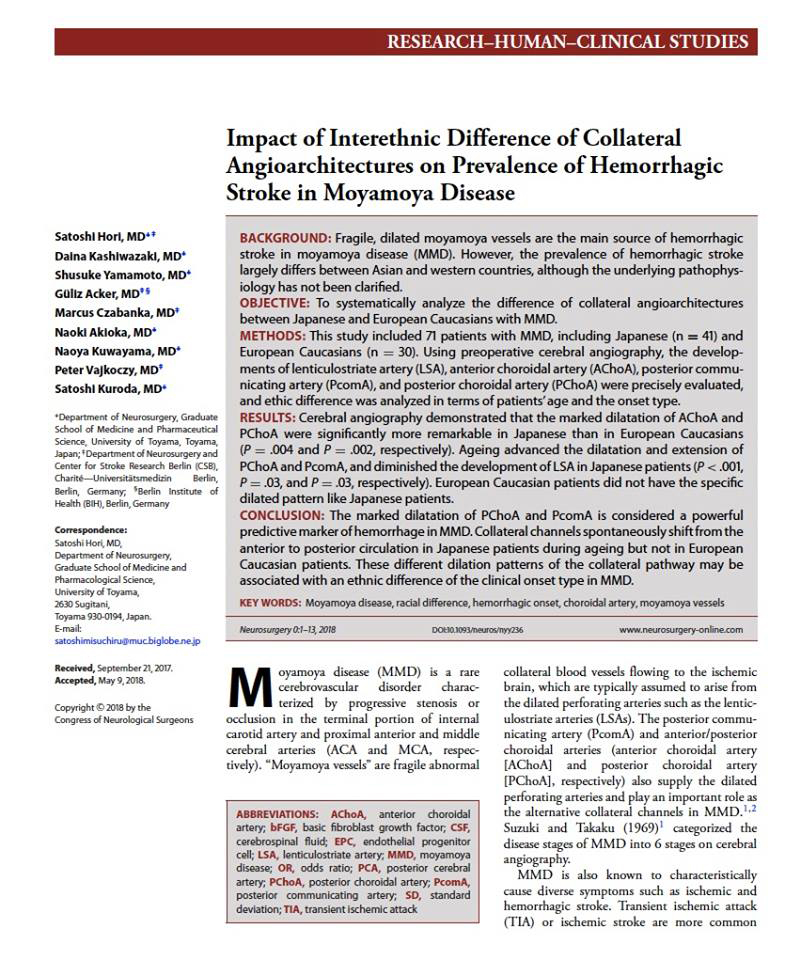 A Voyage to Depth of Neuroscience Vol. 50

Abstract
BACKGROUND:
Fragile, dilated moyamoya vessels are the main source of hemorrhagic stroke in moyamoya disease (MMD). However, the prevalence of hemorrhagic stroke largely differs between Asian and western countries, although the underlying pathophysiology has not been clarified.
OBJECTIVE:
To systematically analyze the difference of collateral angioarchitectures between Japanese and European Caucasians with MMD.
METHODS:
This study included 71 patients with MMD, including Japanese (n = 41) and European Caucasians (n = 30). Using preoperative cerebral angiography, the developments of lenticulostriate artery (LSA), anterior choroidal artery (AChoA), posterior communicating artery (PcomA), and posterior choroidal artery (PChoA) were precisely evaluated, and ethic difference was analyzed in terms of patients’ age and the onset type.
RESULTS:
Cerebral angiography demonstrated that the marked dilatation of AChoA and PChoA were significantly more remarkable in Japanese than in European Caucasians (P = .004 and P = .002, respectively). Ageing advanced the dilatation and extension of PChoA and PcomA, and diminished the development of LSA in Japanese patients (P < .001, P = .03, and P = .03, respectively). European Caucasian patients did not have the specific dilated pattern like Japanese patients.
CONCLUSION:
The marked dilatation of PChoA and PcomA is considered a powerful predictive marker of hemorrhage in MMD. Collateral channels spontaneously shift from the anterior to posterior circulation in Japanese patients during ageing but not in European Caucasian patients. These different dilation patterns of the collateral pathway may be associated with an ethnic difference of the clinical onset type in MMD.